St. John's Oratory
At the Historic
Fishermen's & Seamen's Memorial Chapel
And Its Campanile (Bell-tower)
The Bells Are Rung Traditionally
For the Angelus of the Blessed Virgin Mary
And for the Consecration
At the FullyTraditional Latin Mass (1950)

ST. JOHN'S ORATORY IS THE ONLY LOCATION IN THE BAY AREA THAT HAS PRESERVED THE REAL, VALID, FULLY TRADITIONAL CATHOLIC LATIN MASS (1950) AND RITES BEFORE THEY WERE CHANGED INTO A HALF NEW ORDER "NEW LATIN" (AKA "EXTRAORDINARY") SERVICE IN 1962 AND BEFORE, INTO AN INVALID NEW ORDER SERVICE IN 1969. Even the 1962 "New Latin" service is NOT the TRADITIONAL CATHOLIC Latin Mass, even though it may be falsely advertised as such to trick the ignorant into its Protestantized service by throwing in some Latin. We here at St. John's Oratory since 1992 have never deviated from the true and valid Traditional Latin Mass, True Sacraments, and True Faith of 2,000 years.

St. John's Oratory did not come only recently to this Apostolate, but has offered, with experience, knowledge, and commitment, the perpetual, immemorial Traditional Latin Mass and Divine Office every Sunday and Holyday since 1992. St. John's Oratory is also known as a center for promoting the traditional Latin Gregorian chant of the traditional Roman rite. Gregorian chant is sung every Sunday and Holyday by the St. John Gregorian Schola of San Francisco.

The Fishermen's & Seamen's Memorial Chapel is a San Francisco historical landmark blessed May 21, 1981, by His Eminence Salvatore Cardinal Pappalardo, Archbishop of Palermo, and dedicated to the memory of those who have lost their lives at sea. We pray at every Mass for the fishermen and seamen of this port.

The chapel is located in the heart of Fisherman's Wharf, northeast of Jefferson & Taylor, down the Pier 45 access road, next to the bell-tower. There is free parking adjacent to the chapel and wheelchair access. The Society of St. John the Apostle (founded in 1992) operates independently of any diocese or other religious society as an Oratory, not a parish.

For general information about the times and nature of the Society's services, click on SERVICES AT THE ORATORY. All services are offered only on site. This is not a wedding chapel. We do not conduct weddings or funerals except for regular members of the congregation.

For the Society's current schedule of fully Traditional Latin Masses and other traditional services, click on CURRENT MASS SCHEDULE BULLETIN.

If you wish to receive our weekly E-mail bulletin containing information on Oratory schedules and activities, please send your name, mailing address, and E-mail address to the SOCIETY. If you have any questions, you may E-mail them to the SOCIETY as well.

Relying upon your continuing generosity, we do not send out numerous fund-raising communications throughout the year, but only one at Advent/Christmas and one at Holy Week/Easter. We ask you, therefore, before secular Christmas preparations intrude upon your spiritual Advent preparation, to consider sending a tax-deductible donation to support the Oratory's work as the only site in the San Francisco Bay Area making available the fully-traditional (1950) Roman-rite Latin Mass, Sacraments, and Sacred Chant. See the "Donations to the Society" section below. Contributors become Benefactors of the Oratory and share in the fruits of all the Divine Offices and Holy Masses that we offer here.

The Matins will be followed by the procession to the creche and the High Mass of Christmas at Midnight, which will be chanted by our St. John Schola. The fully traditional Latin Matins and Midnight High Mass are available only at this location in the Bay Area. There will be no other Mass at the Oratory on Christmas day. For further information, click on Current Mass Schedule Bulletin. 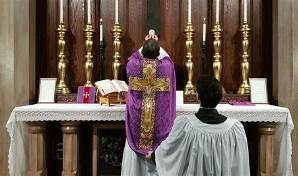 An additional altar server is needed to serve the Traditional Catholic Latin Mass. No experience or knowledge of Latin is necessary. We will teach you what you need to know. If you would like to serve at the altar or have any questions, you may address the Society. 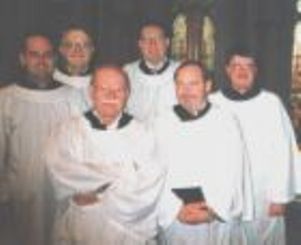 Additional men are invited to add their voices to the St. John Schola Cantorum (small choir) to sing Gregorian plainchant in an authentic setting. No previous knowledge of the chant or musical notation is required; most of our participants have had little or no music background. We can teach you all that you need to know by ear if you have just a basic ability to sing. No auditions. You do not have to be Catholic. We are a small, friendly group, no pressure, just enjoyment, but we are led by a highly-experienced praecentor (leader).

Since 1995 our group has been chanting in the intimate setting of St. John's Oratory at the historic Fishermen's & Seamen's Memorial Chapel at Fishermen's Wharf in San Francisco. We practice 9:00-9:30 a.m. Sundays and then chant Terce of the traditional Catholic Divine Office 9:30-10:00 a.m and chant monthly for the only fully traditional Missae Cantatae (Sung Masses) in the Bay Area.

We are currently producing live recordings of our chant for the ChantCD label. You will receive a free copy for family and friends of any CD in which you participate. We make no pretense to being anything but amateurs (lovers of the chant) and to demonstrating merely what is achievable over time by an amateur small chant choir.

Our traditional Catholic schola answers the peal of the call to prayer from the bell-tower to chant Terce of the traditional Catholic Divine Office, the Hour appointed to be chanted before Holy Mass. Terce is followed by the chanting of the Angelus to the traditional eighteen strikes of the bells. Then follows the Asperges, or lustral sprinkling of the congregation with Holy Water, after which Holy Mass begins, which is a chanted High Mass about once a month.

Donations to the Society

If you wish to support the work of the Society, click on the box above to make a donation easily, securely, and confidentially by bank account or credit card through PayPal (note in the PayPal message field: "Donation to SSJA"). By doing so, you will be part of the habitual intentions of Benefactors specially commemorated at Traditional Latin Masses. Using PayPal reduces our administrative burden considerably, but if you need to use a paper check, E-mail the Society for a mailing address.

Since July 8, 2001, the Society's ninth anniversary, you are site visitor number:

From August 23, 1992, through December 31, 2021, the Oratory of St. John has received Traditional Latin Mass visits totaling:

Copyright © 1991-2023. Publication of any material from this site without explicit written permission is strictly prohibited. The Society of St. John the Apostle (founded in 1992) operates independently of any diocese or other religious society as an Oratory, not a parish. The information and materials contained in this web site are provided "as is" without warranty of any kind, either express or implied, including without limitation any warranty of accuracy, adequacy, or completeness of the information and materials, title, non-infringement, merchantability, fitness for a particular purpose and freedom from computer viruses.